It's been six weeks or so since my last post and in that time I have been working a plein air using oil as much as possible, but also in watercolour and sketching. We have been to Exmoor twice, the second time frequently in unrelenting fog. I have met up with various friends and worked side by side with them, but mostly I have worked on my own in the Dorset landscape and by the coast.
I realised quite early on that most of my problems came from not having sufficient experience of working alla prima in oil paint. So I  tried some closer to home stuff, the washing in the garden and a bit of still life just to get a handle on how to use the paint.  I read everything I could find online that explained the technicalities and have gradually put together a working method which is beginning to show fruit, I think.
When I first arrive at a location, I use my camera to try out compositions, a quick snap gets rid of all the peripherals and allows me to see whether my chosen scene really has a good structure. Composition is so important, it is the skeleton on which the flesh of a painting hangs, if the composition is wrong, try as you might, you'll never have a satisfactory image. Next, in an A6 sketchbook I make a quick  tonal pencil sketch of my subject.  I sort it out into four tones. Leaving white paper for the lightest areas, I shade everything else with a  light mid tone, subsequently adding the dark mid tone and finally the dark. I may try out several compositions, keeping in mind the final proportions of the piece and whether it will have a landscape or portrait format. Time spent on the planning stage is never time wasted.
I have been painting on pieces of MDF, primed with acrylic gesso and tinted warm orange which seems to work as a good underpainting colour. I plot the large areas  with a few lines of charcoal, then knock it back to reveal a ghost of an image.
and on to the paint.. I'm trying to discipline myself to mix all my colours before I start, but I usually forget something. However the basic principle is to lay in all the darks first, then the mid tones and finally the lights, trying hard to only work on each area of the painting once. This is harder than it seems as all colour and tone decisions have to be taken before making the mark. Inevitably I end up with areas that need to be modified and that's when the problems start. Scraping off is probably the only option and I have found a plastic glue spreader to be a suitable tool, slightly more controllable than a palette knife.  A rag tightly wrapped around the handle of a paintbrush is also useful, although I have ended up wiping off more than intended when I lost sight of the other end of the rag.
One of the things Ive noticed is that the paintings all seem to be quite dark, I think this may be due to working in bright daylight and then bringing them into a darker environment to assess. So I'm trying to keep that in mind especially with the light mid tone areas.
Here are the oils I've done so far, most have had to be tweaked in the studio as I'm not fully in control of the paint, but I hope it's coming. 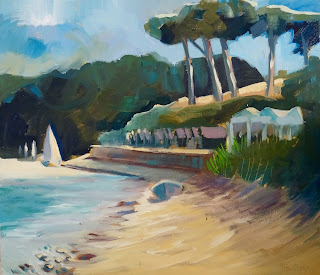 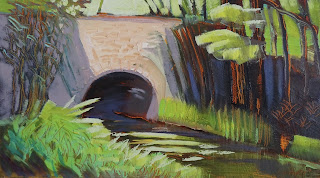 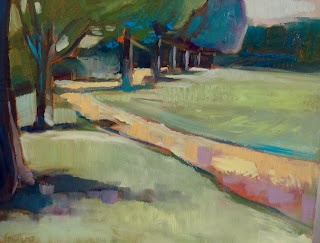 By the free car park in Blandford, morning 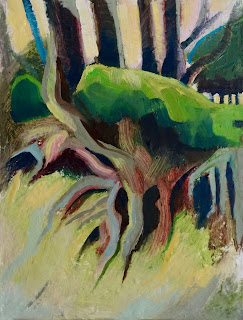 Exmoor, Beech roots on the bank 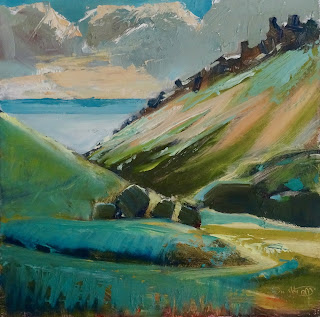 Lynton, Valley of the Rocks 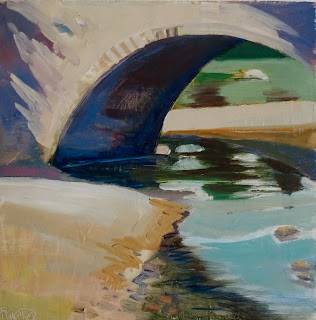 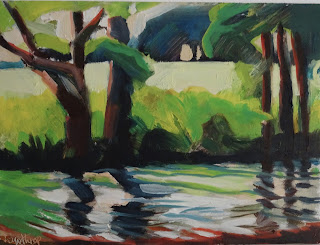 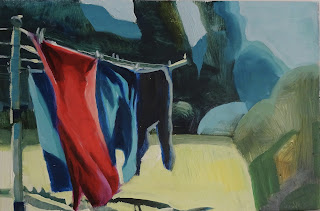 Washing in my garden, morning 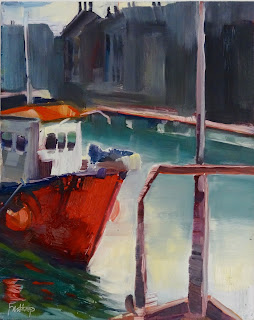 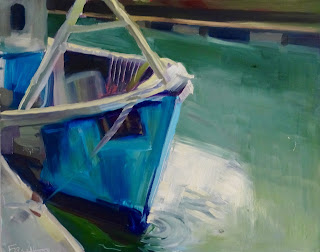 Weymouth, from the bridge, morning 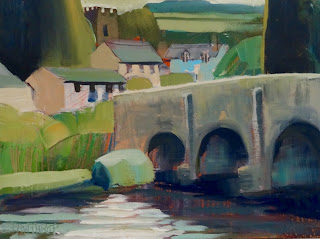 This is the only "untweaked" one.
Chebbard Hill, on a beautiful Sunday morning starting at about 7.30, only saw three cars in a two hour session. 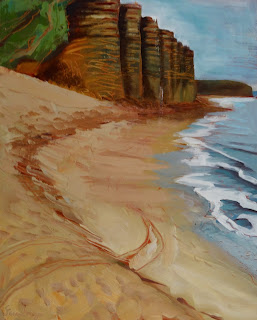 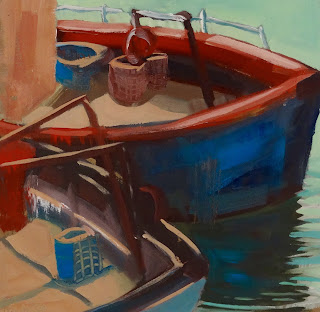 West Bay, lunchtime, very quick as it started to pour with rain.
Posted by Sue's Blog at 13:57 No comments: